I have been SO impressed with the number of people that reach out to me every week about kidney donation. People are so curious and are really looking to do something meaningful with their lives! I wanted to get a post on my site that addresses some common misconceptions as well as some of the magic that came out of this process for me.

You are guaranteed to be a match to your family members, so you’re going to save your kidney in case someone in the fam needs one.

Just because you are related to someone doesn’t mean that you’re definitely a match. Being a match to someone requires that you have a compatible blood type, and you need to be a tissue match. I don’t have exact stats, but I have read multiple places that for siblings there’s a 25% chance of being an “exact match”, and a 50% chance of being a “half match”.

You’re too old to donate.

I have two friends that both donated when they were 71 years old. One is a running friend; another is my recipient’s husband. They are both healthy as can be post-op!

You can’t afford the medical costs.

The recipient’s insurance covers all the costs related to the medical testing and the surgery itself. The only thing I paid out of pocket from the whole process was for parking at the hospital during a couple visits, which totaled a whopping $6.

If you decide to back out as late as the morning of surgery as you’re being wheeled back to the OR, the transplant center will absorb the costs.

I also wasn’t out any money for lost wages because my short term disability covered everything. (I had a great HR person walk me through all that well in advance!)

Donating a kidney will decrease my life expectancy.

There actually isn’t a change in life expectancy for living donors versus non-donors.

If you end up with kidney disease, you’re screwed.

Not true. If as a living donor you end up with kidney disease you are given prioritization points that move you up the list for a deceased donor kidney. 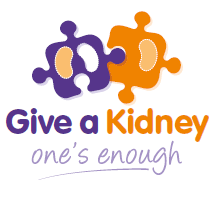 Now for the really good stuff!

It is nothing short of magical to me that you can be so healthy, that you want to give someone else that same health that you’ve experienced. I was able to take my energy, vibrance and hope and send it in a cooler to a different time zone to give someone the gift of feeling the best they have felt in years after just a few short hours!

You can save multiple lives with just one organ.

Through paired donation, your one kidney can save multiple people – that is the most effective altruism I can think of! In my case I started a national donor chain with my kidney. My kidney flew to Denver and was transplanted into my recipient. Earlier that same morning her husband donated his kidney to a stranger in San Francisco, and from there two more people got kidneys. Isn’t that amazing??? It still blows my mind that one person can affect so much positive change.

You can say with absolute certainty that your life had meaning, because you were courageous enough to save someone else’s.

I still have a hard time wrapping my head around this.

You created a positive ripple effect that you can never fully track or even understand.

I think about the day I had my psychological evaluation at the hospital. While my support person was being interviewed I sat in a busy part of the hospital just watching everyone. My attention wasn’t drawn to the patients, but to the caretakers.

By donating an organ you aren’t just saving someone’s life, you are impacting the lives of their caregivers, their friends, their family, their co-workers, their neighbors, the staff at their dialysis center…

You could donate a kidney and a 30 something year old man gets it. His wife can sleep better now knowing that he’s healthy, two years later they are finally able to have a baby, that child goes on to be inspired by modern medicine and discovers a cure to cancer… You might say that’s a stretch, but I don’t think so.

Part of my fascination with this process is that beautiful possibility that there’s a ripple effect of a countless number of people whose lives are better now because of one decision I made. That’s beautiful, and magical, and so possible for so many other people to experience.

Follow Leaving it better than I found it. on WordPress.com